Condensing units are temperature control devices that are used in refrigerators, air conditioners, heat pumps as well as chillers. These units help in moving energy in the heat form by compressing a gas called refrigerant vapor. Then it pumps the vapor through a system of coils and making use of the surrounding air around the coils to heat and cool spaces. 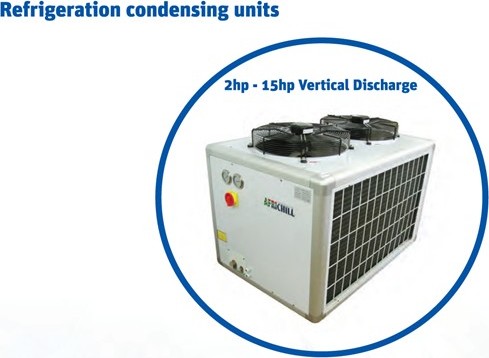 The condenser coils are located along with the compressor and controlling devices within the condensing units. Condensing units are available in a wide range of sizes from small ones used in office fountains to huge ones used in air condition buildings like the Pentagon. Also, these units vary in designs such as plain tube, plate type or parallel pass units and more.

At Africhill we manufacture and supply air-cooled condensing units of the highest standards.

What are Air-Cooled Condensing Units?

Air-cooled condensing units comprise a coil of ample surface so that air can be blown by a fan or induced by natural draft. Such units are usually used in small capacity refrigerating units such as residential air conditioners or air conditioning system of small offices. To keep these units working in the their best condition, these should be kept free from dust, dirt, lint and other foreign elements as accumulation of these particles may reduce the airflow around the tubes and fins.

Choosing the right location is the first and foremost thing that needs to be considered while installing an air-cooled condensing unit. At times customers have a plan for the location that might differ from the location the installing contractor may find suitable. Some customers want to utilize their indoor space completely and hence may wish for locating the condensing unit outdoors or in an indoor space that won’t interfere with their operation.

If the preferred location is indoors the contractors must ensure that the location has sufficient ventilation. Also, air-cooled condensing units located indoors may add heat to the space which might be objectionable. So it is highly advised to check with the manufacturer for ventilation requirements before installing.

On the contrary, if the condensing unit needs to be installed outdoors, several components should be added to it. The added components include a crankcase heater to prevent refrigerant migration during the off-cycle when the unit is exposed to extreme cold temperatures. Another component is a fan-cycling control or a head-pressure controller that helps in keeping the high side pressure above a minimum value throughout low outdoor temperatures. Other components include air-sensing temperature controller, defrost timer, and an enclosure to protect the unit from outdoor environment. 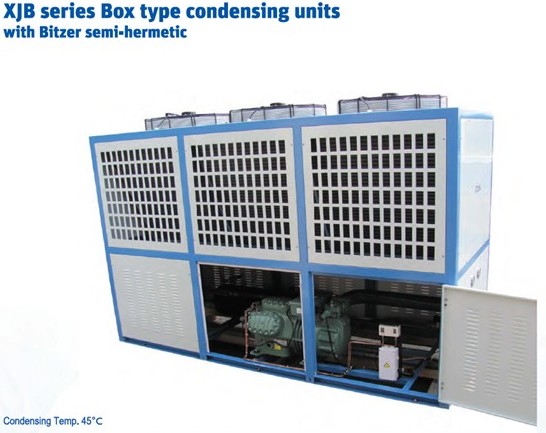 We at Africhill are a well-established name as far as manufacturing, supply and installation of air-cooled condensing units. Our condensing units are visually appealing as well as highly functional.

Want to know more about our condensing units? Contact us today!